skip to main | skip to sidebar

Now that we're back on British Summer Time we will be back on the orchard on Thursday evenings between 6.30 and 8 p.m.  First session will be on April 19th.

Hope to see you there!
Posted by Orchard 49 - the community orchard at Seymour Grove Allotments at 07:31 No comments:

The 2017 growing season has been a strange one. We were very pleased to see a very good amount of fruit on the trees early in the year. This is the first year that the bees which are now resident on the Orchard have been busy feeding on the blossom.  The apiary went in last year after the trees had blossomed, so we were eagerly anticipating better pollination - and they have done us proud.

The weather has affected harvesting more than ever this year. We thought we'd have a bumper raspberry crop (those busy bees again), but a spell of very dry weather meant that lots of the fruit shrivelled up.

Equally, apples are ready to pick much earlier. So much so, that at times its only the number of fallers, or apples pecked by birds that has signalled that its time to pick.

We continue to work on the orchard on Thursday evenings, and this year have welcomed four new volunteers; Stuart, Caroline and Chris and Dawn. I'm always interested to know what brings people to the orchard, and importantly, why they keep coming. For Caroline and Chris, who live in the city centre their visits to volunteer on the orchard provide a break from city centre living:  "I know that for us when we can get out it's a connection with nature that we don't get living in a block of flats, and it always de-stresses us."

Here are some other pictures from the orchard taken recently.

You can join us on the orchard on Thursday evenings 6.30-8 pm until the nights draw in.

Posted by Orchard 49 - the community orchard at Seymour Grove Allotments at 12:14 No comments:

2nd July sees the second Old Trafford Open Gardens event.  The community orchard is one of the community green spaces to visit on the day.  The allotment site will be opening its gates, the pavillion will be open for refreshments, the pizza oven operating, so no excuse not to pop down and visit.

The orchard is located in the far right hand corner of the site; head for the community plot at the end of the tarmac path and then follow the path down to the orchard.

There is a bench in the middle of the orchard, a lovely spot to take it all in.  See if there are any raspberries to taste (along the fence with the bakery buildings), check out the fruit arch. Could you do something similar in your garden? Its a great way to get lots of different varieties of fruit in a small space.

Equally, the fenceline that runs the length of the orchard was created to show what can be done when you train fruit trees. Regular pruning into a specific shape (in our case vertical cordons) enables you to grow more varieties and this way you shouldn't ever have a glut of apples!  How many different varieties do you see along the fenceline? Clue - each tree is a different variety!  They are all labelled.

The apples and pears aren't ready to eat until October, do come and taste them then.

If you're interested in helping out, we run regular weekly work sessions on Thursday evenings from 6.30-8 p.m.
Posted by Orchard 49 - the community orchard at Seymour Grove Allotments at 05:00 No comments:

So what do Orchard49 volunteers get up to?  This 'Year in an Orchard' graphic created by the People's Trust for Endangered Species serves as a useful prompt for getting jobs done. 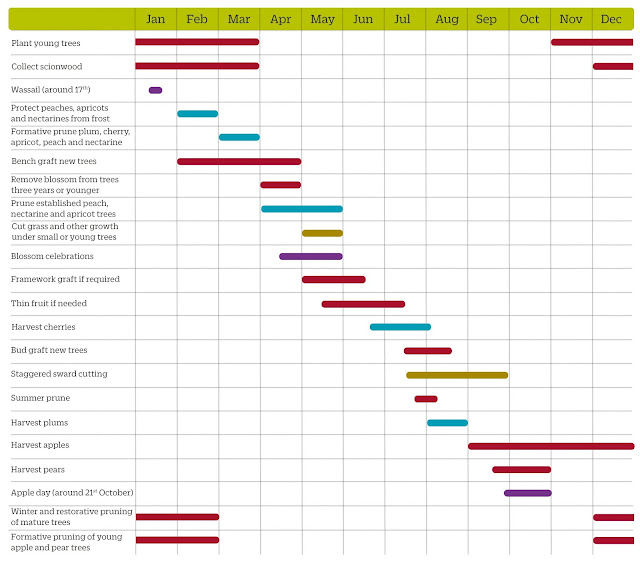 We will be re-starting our evening work sessions in March, once the clocks go forward (this happens on 26th March in 2017). If you'd like to get involved please get in touch and we can add you to our mailing list.

Posted by Orchard 49 - the community orchard at Seymour Grove Allotments at 05:44 No comments:

On Sunday a couple of Orchard 49 volunteers joined Helping Britain Blossom at Unicorn's Apple Day. We were outside juicing apples using the pedal powered scratter (called Pedal Pedal Squish Squish). Inside the shop customers were able to taste over 20 English apple varieties.  Quite a few of these were varieties that we don't have on Orchard 49 so it was good to sample them.

Here are some photos of the pressing we did.

Posted by Orchard 49 - the community orchard at Seymour Grove Allotments at 01:12 No comments:

We were blessed with a gloriously warm, sunny October day for Apple Day.  It was an early start to let the BBC radio Manchester crew in at 8.30 am. They came to do some outside broadcast work promoting the event to listeners.  Volunteers started to arrive at 9 am and by 10 there were plenty of people busily prepping apples for pressing.

We had a new machine to test out as well. Helping Britain Blossom asked Alfred Chow to create a pedal powered juice machine.

The idea is someone can pedal the trike to power the machine that pulps the apples before they go into the press (the machine is called a scratter). At the back of the trike you can also see a larger apple press which we used in addition to the smaller press that you can see in the first photo.

We had lots of delicious cakes baked for the day, all but one included apples and everything was enjoyed by those who visited.

As in the past we did apple tasting, giving people a chance to taste some of the apples from Orchard49.  There were 12 different varieties available for tasting, including a few that we've not been able to try before (because they had already been picked and eaten). Firm favourites were Merlin's Apple, Lemon Pippin, Dog's Snout (for the aroma of these apples), Yorkshire Cockpit and Ladies Finger of Lancaster.  The last three of these are all cookers, but everyone found them to be far less sharp than the widely available cooker, Bramley.  The highlight of the apple tasting was the adventurous children who happily tucked into anything and everything, often returning for more.

As always, thanks go to all the volunteers who made the event possible. The bakers, the choppers, the refreshments whiz, thanks so very much for your time and enthusiasm.

Posted by Orchard 49 - the community orchard at Seymour Grove Allotments at 02:30 No comments:

Its time to celebrate the harvest again. Here is a poster for the event and a picture of a pedal powered scratter (prepares apples for pressing) which will be used for the first time at our event.

Hope you can join us. 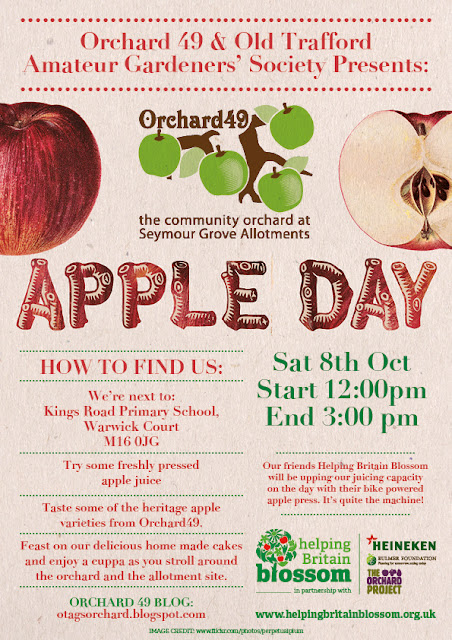 Posted by Orchard 49 - the community orchard at Seymour Grove Allotments at 09:39 No comments: 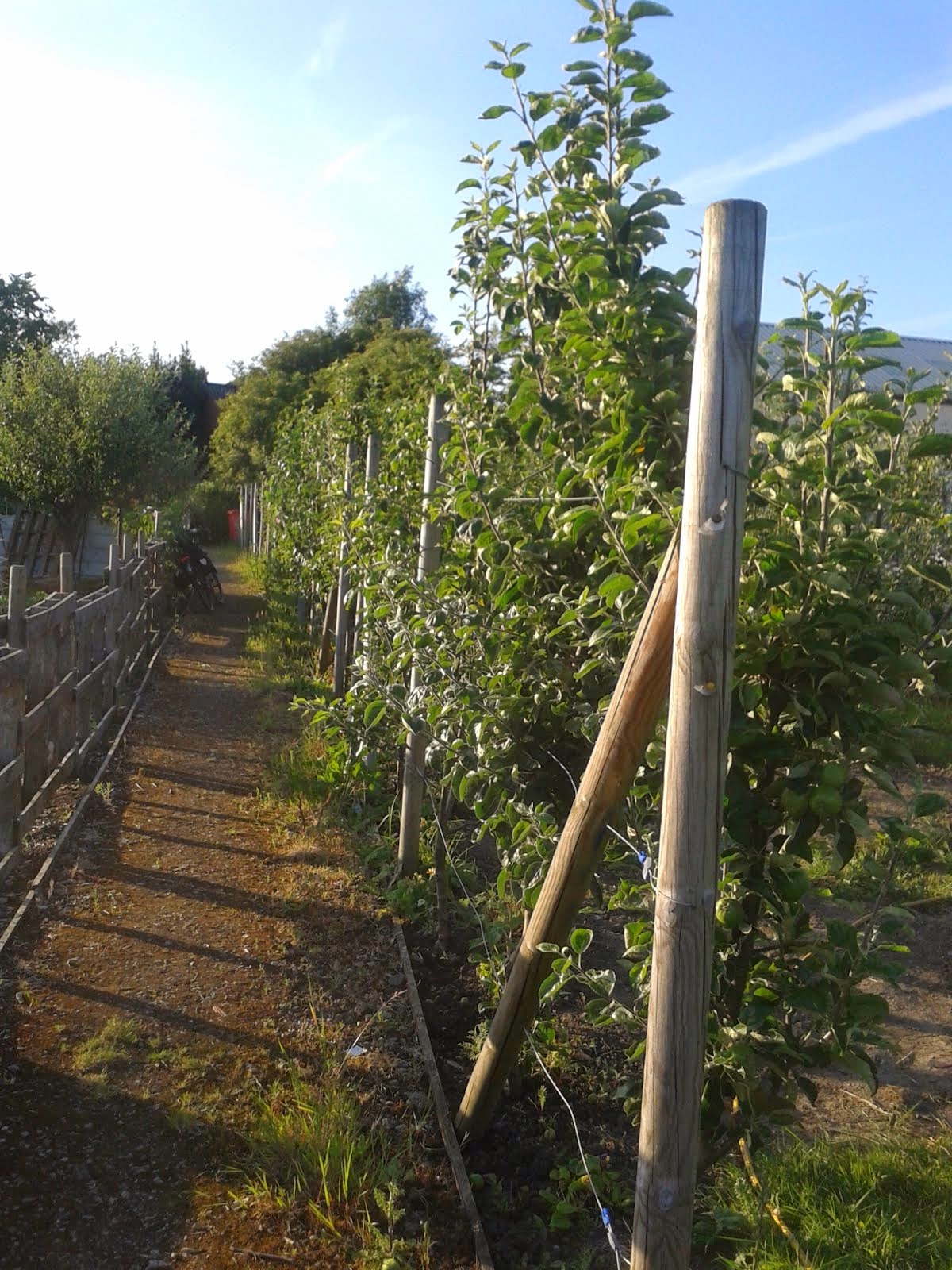